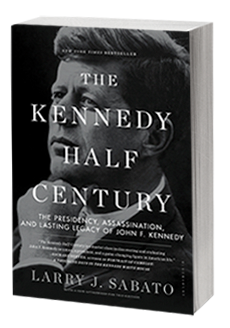 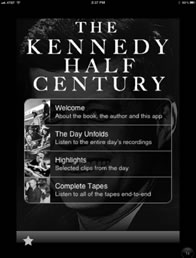 Get The Kennedy Half Century App

Listen to all the Dallas Police recordings of the entire day of the assassination. Explore new mysteries.

The Kennedy Half Century

The Presidency, Assassination, and Lasting Legacy of John F. Kennedy

John F. Kennedy died almost half a century ago—yet because of his extraordinary promise and untimely death, his star still resonates strongly. On the anniversary of his assassination, celebrated political scientist and analyst Larry J. Sabato—himself a teenager in the early 1960s and inspired by JFK and his presidency—explores the fascinating and powerful influence he has had over five decades on the media, the general public, and especially on each of his nine presidential successors.

"The Kennedy Half-Century is a Master Class in discovering and evaluating John F. Kennedy as a man, a President and a game-changing figure in American life. —Richard Reeves

"Larry Sabato not only sheds new light on the assassination... [but] masterfully explains the enduring legacy of Kennedy and his 1000 days in office." —John Grisham

"...sure to be the go-to reference on the assassination for years to come." —Bob Schieffer

"a timely, well-documented, and measured view of our 35th president." —Publisher's Weekly